Vampire Films Around the World

Essays on the Cinematic Undead of Sixteen Cultures

Vampires are arguably the most popular and most paradoxical of gothic monsters: life draining yet passionate, feared yet fascinating, dead yet immortal. Vampire content produces exquisitely suspenseful stories that, combined with motion picture filmmaking, reveal much about the cultures that enable vampire film production and the audiences they attract. This collection of essays is generously illustrated and ranges across sixteen cultures on five continents, including the films Let the Right One In, What We Do in the Shadows, Cronos, and We Are the Night, among many others. Distinctly different kinds of European vampires have originated in Ireland, Germany, Sweden, and Serbia. North American vampires are represented by films from Mexico, Canada, and the USA. Middle Eastern locations include Tangier, Morocco, and a fictional city in Iran. South Asia has produced Bollywood vampire films, and east Asian vampires are represented by films from Korea, China, and Japan. Some of the most recent vampire movies have come from Australia and New Zealand. These essays also look at vampire films through lenses of gender, post-colonialism, camp, and otherness as well as the evolution of the vampiric character in cinema worldwide, together constituting a mosaic of the cinematic undead.

James Aubrey is a professor of English at Metropolitan State University of Denver, where he teaches British and world literatures as well as film studies. He has published numerous articles on literature and three previous books. 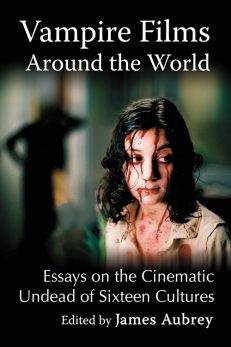 You're viewing: Vampire Films Around the World $45.00
Add to cart