New Translations of Don Juan: The Jackal of Seville; A Sinner Saved, a Saint Damned; and The Timid Young Man at the Palace Gate

﻿ Generally credited as the creator of Don Juan, one of the most famous characters in literature, Tirso de Molina (1580–1648) is largely unknown to English readers. He wrote within an extraordinary literary milieu (the Spanish Golden Age—Velázquez, Ribera, Cervantes…) and left his own mark.
This book presents three of his best known works, never before translated in one collection: the Don Juan play, a theological play and a court comedy.
Don Juan is recognized as a masterpiece of psychological portraiture and has been the subject of countless analyses, and diagnosed as a misogynist, a repressed homosexual, a misanthrope, a narcissist. However he may be interpreted, the reader senses that in Don Juan, Tirso was probing a dark area of the human spirit.
The playwright is known for his realistic and penetrating psychological portraits of women. His female characters are forceful, cunning, witty and courageous, and their frank and unabashed sexuality is striking for the age—so much so that Tirso was censured and eventually banished from Madrid.

Raymond Conlon is a professor at Saint Peter’s University in New Jersey. He has published extensively on Spanish, English, and American literature and edited an anthology of Renaissance drama.

Notes on the Translation 7

Don Juan: The Jackal of Seville 11

A Sinner Saved, a Saint Damned 66

The Timid Young Man at the Palace Gate 109 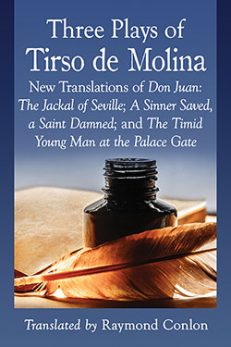