A Companion to the Novels

Thomas Hardy enjoyed a long and distinguished career as a novelist before devoting his talents to writing poetry for the remainder of his life. This book focuses on Hardy’s remarkable achievements as a novelist. Although Victorian readers considered some of his works controversial, his novels remained highly regarded. His novels still appear in the syllabi of courses in Victorian literature and the British novel, as well as courses in feminist/gender studies, environmental studies, and other topics.

For scholars, students, and the general reader, this companion helps to makes Hardy’s novels accessible by providing a detailed biography of Hardy, plot summaries of each novel, and analyses of the critical contexts surrounding them. Entries focus on the people, cultural forces, literary forms, and movements that influenced Hardy’s novels. The companion also suggests approaches for original interpretations and suggestions for further study.

Ronald D. Morrison is a professor of English at Morehead State University in Kentucky. He has published critical essays on Thomas Hardy, Charles Dickens, Richard Jefferies, and other 19th-century writers.

Laurence W. Mazzeno, president emeritus of Alvernia University, Reading, Pennsylvania, is the author or editor of 20+ books and more than 300 articles and reviews on literature and history. He lives in Arvada, Colorado.

“The McFarland companion volume will be a useful reference book for [Hardy’s] work. It includes a brief biography of Hardy and key personages in his life, and it covers topics that Hardy and his contemporaries felt were important and that influenced him personally and professionally. …A plot summary traces each novel’s action, whether streamlined or complicated, and often includes critical context and observations about approaching Hardy’s work…Works cited and the index are very helpful. An indispensable volume…highly recommended”—Choice 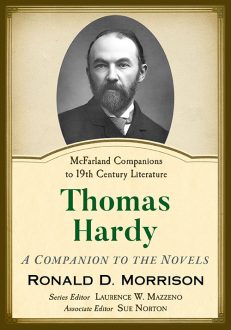