Thomas Frère and the Brotherhood of Chess

A History of 19th Century Chess in New York City

The 19th century in the United States saw the evolution of a leisure society. Enjoying numerous technological advances, people had free time to indulge in a variety of pursuits. An assortment of board games flooded American homes. By mid-century, chess had surpassed all others in popularity. The author of three important chess texts, Thomas Frère was instrumental in the growth of chess in America. This work reveals the 19th century development of chess through the writings of Thomas Frère: books, letters, chess columns and scrapbooks, illuminating important players of the time and their games. The main text is divided into four sections covering 1827–1900. The first looks at the early years as chess moved from private to public venues, and formal chess clubs were established such as Frère’s Brooklyn Chess Club in 1856. The second section deals with the First American Chess Congress and the advent of Paul Morphy and the third is on Frère’s role in the first formal world chess championship, thoroughly documented in his letters. The fourth section examines the last decade of the 1800s as chess moved into the 1900s. 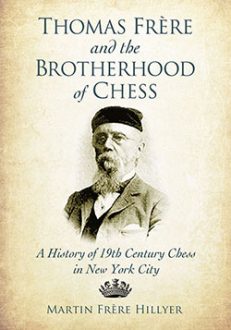 You're viewing: Thomas Frère and the Brotherhood of Chess $39.95
Add to cart