The rich history of African-American theatre has often been overlooked, both in theoretical discourse and in practice. This volume seeks a critical engagement with black theatre artists and theorists of the twentieth century. It reveals a comprehensive view of the Art or Propaganda debate that dominated twentieth century African-American dramatic theory. Among others, this text addresses the writings of Langston Hughes, W.E.B. DuBois, Alain Locke, Lorraine Hansberry, Amiri Baraka, Adrienne Kennedy, Sidney Poitier, and August Wilson. Of particular note is the manner in which black theory collides or intersects with canonical theorists, including Aristotle, Keats, Ibsen, Nietzsche, Shaw, and O’Neill.

Henry D. Miller is a veteran of the 1960s and 1970s black theatre movement. A director and playwright, he has written broadly about American theatre.

• “Theorizing Black Theatre is the kind of book that you keep in your backpack and take out on the subway with pen in hand so you can take notes. Every couple of pages you will go over enough material to constitute an undergrad course in African American theatre and dramaturgy. Miller gives us a whole new look at our country and begins to undo the damage that segregation has done to our historical perspective”—African American Playwrights Exchange
• “This book can be rightfully described as a milestone…deserves a place in every library, academic to public”—Broadside 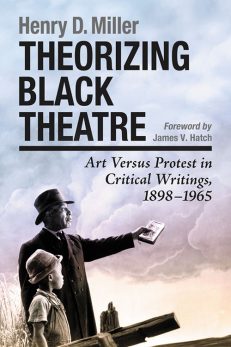