The Year Without a World Series

Major League Baseball and the Road to the 1994 Players’ Strike

The 1994 Major League Baseball season promised to be memorable. Long-standing batting and pitching standards were threatened, including the revered single-season home run record. The Montreal Expos and New York Yankees were delivering remarkable campaigns. In August, acting commissioner Bud Selig called a halt to the season amid the League’s latest labor dispute. The shutdown led to a lockout as well as cancellation of more than 900 regular season games, the scheduled expanded rounds of playoffs, and that year’s World Series. Like all labor struggles, it was fundamentally about control—of salaries, of players’ ability to decide their own fates, and of the game itself.
This book chronicles Major League Baseball’s turbulent ’94 season and its ripple effects. It highlights earlier labor struggles and the roles performed by individuals from John Montgomery Ward, David Fultz, and Robert Murphy to Marvin Miller, Andy Messersmith, Jim “Catfish” Hunter, and Donald Fehr. Also examined are the ballplayers’ own organizations, from the Players League of the early 1890s to the still potent Major League Baseball Players Association doing battle with team owners and their representatives.

Professor emeritus of history and American studies at California State University, Chico, Robert C. Cottrell is the author of twenty books. These include recent studies of the counterculture, the year 1968, American radicalism, black baseball and the World War II smokejumpers. 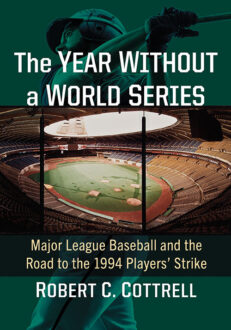 You're viewing: The Year Without a World Series $39.95
Add to cart