Intertwining history and art over five centuries, this detailed overview of Jewish culture and events focuses on how printed writings and artworks have reflected the perceptions of Jews by themselves and others. Filled with nearly 400 illustrations of woodcuts, engravings, etchings, lithographs, serigraphs and other visual works, it details the representation of Jews and Jewish life chronologically while giving individual attention to the regions and countries in which Jews have lived in significant numbers. From editions of the Haggadah to portraits to anti–Semitic cartoons, diaries to newspapers to novels, it analyzes a vast array of works that both molded and revealed Jewish popular opinion.

Constance Harris was active in the Jewish Federation Council of Los Angeles, serving on a variety of Committees and as President of the Women’s Conference. She organized the Women’s Interfaith Committee with the purpose of fostering personal relationships and mutual understanding among differing religious experiences. She lives in Walnut Creek, California.

6 England in the Nineteenth Century: The Industrial Revolution Challenges the Politics of Equity      164

7 France in the Nineteenth Century: The Rule of Napoleon and the Rise of Zionism      200

8 Central Europe and Russia in the Nineteenth Century: Modern Anti-Semitism      234

9 America in the Nineteenth Century: Immigration and Liberation      272

10 England in the Twentieth Century: Working Class to Upper Class      303

12 Germany and Austria in the Twentieth Century: Disaster and Renewal      334

14 America in the Twentieth Century: From the Immigrant Experience to Modernity      389

15 Israel in the Twentieth Century: The Dream Projected, Fulfillment Deferred      421

“this book along with the amazing research the author has done, is the epitome of one picture says 1,000 words. This book is well worth the investment”—The Beverly Hills Courier; “fascinating…well written…recommended”—Association of Jewish Libraries Newsletter; “In her riveting new work, The Way Jews Lived, author Connie Harris masterfully explores over six centuries of Jewish social history with keen eye and balanced perspective. This important study skillfully offers the reader a rare glimpse into the interconnection between complex world events and how Jewish life, with all its triumphs and challenges, is woven irrevocably through them. This enlightening book is a thorough, clearly organized examination which seems to leave no stone unturned, particularly in its fascinating analysis of the rise of anti–Semitism in 19th century central Europe. Sometimes inspiring, occasionally bittersweet, this collection which personifies the heroic struggle of our people is a consistently thought-provoking, entertaining read. I heartily recommend The Way Jews Lived to anyone, regardless of faith, who has a healthy appetite for knowledge.”—Rabbi Steven Weil, Senior Rabbi, Beth Jacob Congregation, Beverly Hills, California. “Constance Harris has discovered a trove of visual representations of Jews—rich and poor, prominent and humble—that illustrate the diversity of Jewish life in the early modern and modern world and the complex graphic responses it inspired. Some are the work of well-known artists, like George Gruikshank and James Whistler, while others are the work of unknown illustrators for the popular press. Whether polished or crude in their execution, they make concrete the contours of Jewish life as it was being transformed by the forces of modernity. Harris places them in the context of their times and provides the reader with the keys to understanding the often obscure symbolic shortcuts they employ.”—Todd Endelman, History Professor, University of Michigan. 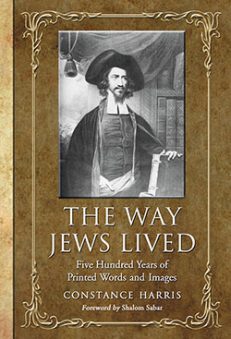