The Union Sixth Army Corps in the Chancellorsville Campaign

A Study of the Engagements of Second Fredericksburg, Salem Church and Banks’s Ford, May 3–4, 1863

The winter of 1862-1863 found the Union Army of the Potomac in sad shape, after bloody battles, multiple defeats, lack of adequate provisions and high desertion rates. When Major General Joseph Hooker took command, he set about revamping conditions. Instructed by President Lincoln to make the destruction of General Lee’s Army of Northern Virginia the Union’s top priority, Hooker mounted the Chancellorsville Campaign. Lee’s aggressive battlefield manner coupled with Hooker’s failure to initiate an assault led to a sound defeat by Confederate forces and left Hooker—who ultimately had only himself and his lack of initiative to blame—looking for a scapegoat. Among those Hooker attempted to hold responsible was the courageous Sixth Army Corps, Major General John Sedgwick commanding, the unit responsible for the sole Union victory of the entire campaign. This history of the battlefield engagements of the Sixth Army Corps on May 3 and 4, 1863, is compiled from contemporary accounts and a variety of postwar histories.

Philip W. Parsons is an educator in Maine State School District 22. A member of several Civil War roundtables, he lives in Hampden, Maine. 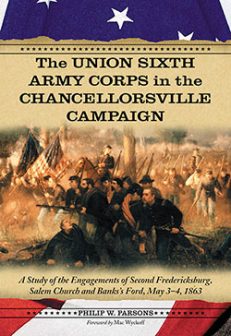 You're viewing: The Union Sixth Army Corps in the Chancellorsville Campaign $29.95
Add to cart