The Union Prison at Fort Delaware

A Perfect Hell on Earth

Located on Pea Patch Island at the entrance to the Delaware River, Fort Delaware was built to protect Wilmington and Philadelphia in case of an attack by sea. When the Civil War broke out, Fort Delaware’s purpose changed dramatically—it became a prisoner of war camp. By the fall of 1863, about 12,000 soldiers, officers, and political prisoners were being held in an area designed to hold only 4,000—and known as the “Andersonville of the North,” a place where terrible sickness and deprivation were a way of life despite the commanding general’s efforts to keep the prison clean and the prisoners fed.
Many books have been written about the Confederacy’s Andersonville and its terrible conditions, but comparatively little has been written about its counterparts in the North. The conditions at Fort Delaware are fully explored, contemplating what life was like for prisoners and guards alike.

Brian Temple has had book reviews and articles published in America’s Civil War, The Scream Factory, Command and Fencers Quarterly Magazine. He lives in New Jersey.

“an interesting regional history…useful…recommended”—Choice; “does a good job in explaining how the suspension of habeas corpus compounded by the breakdown of the prison exchange cartel resulted in the overcrowding”—Civil War Courier; “a great job…excellent descriptions…worth putting on…bookshelves”—The Civil War News; “exhaustive”—Colorado Libraries; “balanced and objective…a good introduction”—North & South. 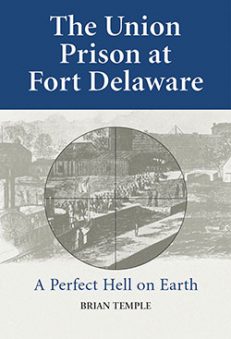 You're viewing: The Union Prison at Fort Delaware $35.00
Add to cart