View cart “The Union Cavalry and the Chickamauga Campaign” has been added to your cart.

The Union Cavalry and the Chickamauga Campaign

During the Chickamauga Campaign, General Stanley’s two Union cavalry divisions battled Forrest’s and Wheeler’s cavalry corps in some of the most difficult terrain for mounted operations. The Federal troopers, commanded by Crook and McCook, guarded the flanks of the advance on Chattanooga, secured the crossing of the Tennessee River, then pushed into enemy territory.
The battle exploded on September 18 as Col. Minty and Col. Wilder held off a determined attack by Confederate infantry. The fighting along Chickamauga Creek included notable actions at Glass Mill and Cooper’s Gap. Union cavalry dogged Wheeler’s forces throughout Tennessee. The Union troopers fought under conditions so dusty they could hardly see, leading the infantry through the second costliest battle of the war.

• “An excellent contribution to the widespread literature of America’s greatest war. It is thoroughly researched, well written, tautly organized, and supplied with numerous applicable tables and photographs. One positive feature is the abundance of extremely well-made sequential maps of the campaign.”H-Net Reviews

• “Dennis Belcher is rapidly becoming one of the leading authorities on the mounted forces (in particular the Union cavalry) that operated in the Confederate heartland during the Civil War. …In addition to detailed operational and tactical narratives, Belcher’s book includes a multitude of photographs along with numerous organizational charts and tables.”—Civil War Books & Authors 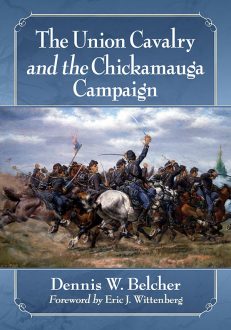 You're viewing: The Union Cavalry and the Chickamauga Campaign $39.95
Add to cart