The Truths of Monsters

Coming of Age with Fantastic Media

As monster theory highlights, monsters are cultural symbols, guarding the borders that society creates to protect its values and norms. Adolescence is the time when one explores and aims at crossing borders to learn the rules of the culture that one will fit into as an adult. Exploring the roles of monsters in coming-of-age narratives and the need to confront and understand the monstrous, this work explores recent developments in the presentation of monsters–such as the vampire, the zombie, and the man-made monster–in maturation narratives, then moves on to discuss monsters inhabiting the psychic landscapes of child characters. Finally, it touches on monsters in science fiction, in which facing the monstrous is a variation of the New World narrative. Discussions of novels by M. R. Carey, Suzanne Collins, Neil Gaiman, Theodora Goss, Daryl Gregory, Sarah Maria Griffin, Seanan McGuire, Stephenie Meyer, Patrick Ness, and Jon Skovron are complemented by analysis of television series, such as Buffy the Vampire Slayer and Westworld.

Ildiko Limpar is a senior lecturer of English at Pazmany Peter Catholic University in Budapest Hungary.

• “Explores the historical and contemporary narrative of the monster in fiction…focus[es] on adolescent dealings with monsters, and the different parts of society they occupy…Limpár gives readers familiar references as they read about monster psychology and how the characters’ reactions to their circumstances parallel real-life reactions to things out of one’s control. This book is an interesting read for all lovers of fantasy and horror, and its academic tone could also make it useful for a freestyle literature course.”—Booklist

• “A wonderful exploration of young adult monster fiction narratives that demonstrates the usefulness, interest and possibilities of monsters. It reminds us what a monster truly is, outside initial appearances. Most importantly, Limpár reminds us what human values we need to save the world from the social monsters: respect, responsibility, compassion and hope.”—The Geek Anthropologist 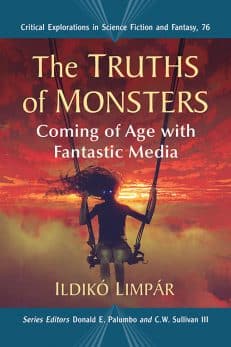 You're viewing: The Truths of Monsters $55.00
Add to cart