The Struggle to Serve

The Ordination of Women in the Roman Catholic Church

Appointed by Pope Paul IV to examine the role of women in the Bible, the Pontifical Biblical Commission found, in part, that the will of Christ would not be disobeyed if the Roman Catholic Church ordained women. The Commission reported: “The New Testament does not settle in a clear way … whether women can be ordained priests, scripture grounds alone are not grounds enough to exclude the possibility of ordaining women [and] Christ’s plan would not be transgressed by permitting the ordination of women.”
Further, it is attested among biblical scholars that although the Bible was written in a patriarchal culture, Jesus is predominantly portrayed as one who promoted the equality of women and men. Yet the Church has continued to exclude women for twenty centuries primarily on the basis of the precedent of twelve male apostles at the Last Supper.
It is clear that women will be needed, and in elevated roles, if a declining Church is to grow and prosper in the future. Catholicism is faced with a precipitous drop in the number of priests, portending parishes without pastoral care—unless women are ordained. Addressed here are the conflicts and questions surrounding the struggle by women to serve.

The Conclusions of the Pontifical Biblical Commission      7

The Development of the Christian Priesthood      8

Does the Priest Represent Jesus’ Humanity or His Maleness?      21

Jesus’ Attitude Towards Women in the New Testament      31

Towards a Biblical Methodology      53

Roles for Women in the Pauline Tradition      62

The Concept of Ministry in the Early Church      87

Arguments Against the Promotion of Women      107

6. A CONTEMPORARY UNDERSTANDING OF THE ORDINATION OF WOMEN      117

Understanding Tradition in the Early Church      124

A Theology of Liberation from Clericalism      141

“well-researched…highly relevant and insightful…. An essential purchase”—Library Journal; “clear, concise, yet broad in scope…. Undergraduate (all levels)”—Choice; “both timely and well thought out…. The book could not be more welcome”—Booklist. 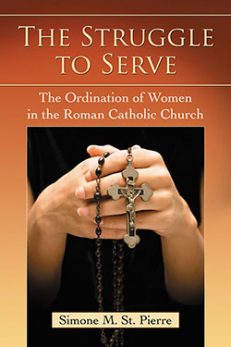