The Sound of Hope

Music as Solace, Resistance and Salvation During the Holocaust and World War II

Since ancient times, music has demonstrated the incomparable ability to touch and resonate with the human spirit as a tool for communication, emotional expression, and as a medium of cultural identity. During World War II, Nazi leadership recognized the power of music and chose to harness it with malevolence, using its power to push their own agenda and systematically stripping it away from the Jewish people and other populations they sought to disempower. But music also emerged as a counterpoint to this hate, withstanding Nazi attempts to exploit or silence it. Artistic expression triumphed under oppressive regimes elsewhere as well, including the horrific siege of Leningrad and in Japanese internment camps in the Pacific. The oppressed stubbornly clung to music, wherever and however they could, to preserve their culture, to uplift the human spirit and to triumph over oppression, even amid incredible tragedy and suffering.

This volume draws together the musical connections and individual stories from this tragic time through scholarly literature, diaries, letters, memoirs, compositions, and art pieces. Collectively, they bear witness to the power of music and offer a reminder to humanity of the imperative each faces to not only remember, but to prevent another such cataclysm.

Kellie D. Brown is a professor of music at Milligan University, where she also serves as the chair of the music department and conductor of the Milligan Orchestra. She is a frequent clinician and performer throughout the country and serves as the assistant conductor and associate concertmaster of the Johnson City Symphony Orchestra. A recognized authority on music in the concentration camps during the Holocaust, she frequently speaks throughout the United States at academic institutions and conferences on Holocaust music. She lives in Kingsport, Tennessee.

Introduction: The Power of Music 5

1. The Rise of the Third Reich and Its Cultural Agenda 9

2. Alma Rosé and the Women’s Orchestra 21

3. Dr. Herbert Zipper: From Dachau to the World 61

4. Alice ­Herz-Sommer and the Music in Terezín 79

5. Władysław Szpilman and the Warsaw Ghetto 121

6. Olivier Messiaen: A Composer Confronts the End of Time 157

7. Dmitri Shostakovich and the Musical Redemption of Leningrad 185

Epilogue: Out of the Ashes—The Israel Philharmonic and Violins of Hope 277

• “Powerful historical accounts of eight musicians whose work during the Holocaust and WW II encouraged hundreds of others as they faced daily brutalities and even death… critical information on the rise of the Third Reich… Each chapter provides rich background—drawn from letters, diaries, memoirs, and other sources—on the musicians and the atrocities they faced. …highly recommended.”—Choice

• “Brown shows how for persecuted and imprisoned Jews, music became a way to preserve their humanity and at times even their lives. … Brown has succeeded admirably in bringing together in one volume so much important research.”—The Washington Post 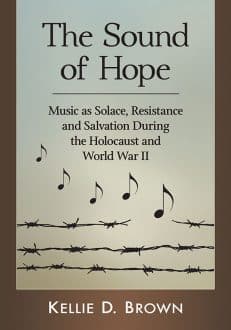