The Sex Is Out of This World

Essays on the Carnal Side of Science Fiction

“Science fiction” can be translated into “real unreality.” More than a genre like fantasy, which creates entirely new realms of possibility, science fiction constructs its possibilities from what is real, from what is, indeed, possible, or conceivably so. This collection, then, looks to understand and explore the “unreal reality,” to note ways in which our culture’s continually changing and evolving mores of sex and sexuality are reflected in, dissected by, and deconstructed through the genre of science fiction.
This book is a collection of new essays, with the general objective of filling a gap in the literature about sex and science fiction (although some work has gone before, none of it is recent). The essays herein explore the myriad ways in which authors—regardless of format (print, film, television, etc.)—envision very different beings expressing this most fundamental of human behaviors.

Sherry Ginn is a retired educator currently living in North Carolina. She has authored books examining female characters on science fiction television series as well as the multiple television worlds of Joss Whedon. Edited collections have examined sex in science fiction, time travel, the apocalypse, and the award-winning series Farscape, Doctor Who, and Fringe.

Michael G. Cornelius is a professor of English and director of the Master’s of Humanities program at Wilson College in Chambersburg, Pennsylvania. He is an award-winning novelist and the author or editor of numerous scholarly works.

PART ONE : ALIEN SEX
The Future, in Bed with the Past: Miscegenation in Science Fiction Film and Television
CYNTHIA J. MILLER and A. BOWDOIN VAN RIPER      17
Alienating Sex: The Discourse of Sexuality in the Works of Octavia Butler
ANCA ROSU      34
“We pair off ! One man, one woman”: The Heterosexual Imperative in Octavia Butler’s Xenogenesis Trilogy
ECHO E. SAVAGE      50
Love at First Contact: Sex, Race and Colonial Fantasy in Star Trek: First Contact
ALLISON WHITNEY      62
“They teach you that in Whore Academy?” A Quantitative Examination of Sex and Sex Workers in Joss Whedon’s Firefly and Dollhouse
HEATHER M. PORTER      86
The Evil Wet Nurse: Preoedipal Development and Primo Levi’s Science Fiction
ROBERT C. PIRRO      102 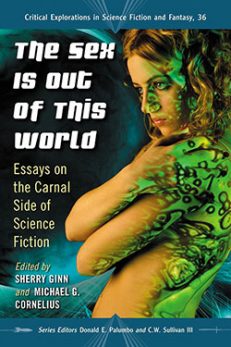