The Romanian Cinema of Nationalism

Historical Films as Propaganda and Spectacle

Prior to the collapse of communism, Romanian historical movies were political, encouraging nationalistic feelings and devotion to the state. Vlad the Impaler and other such iconic figures emerged as heroes rather than loathsome bloodsuckers, celebrating a shared sense of belonging.
The past decade has, however, presented Romanian films in which ordinary people are the stars—heroes, go-getters, swindlers and sore losers.
The author explores a wide selection, old and new, of films set in the Romanian past.

Onoriu Colăcel, an associate professor at Stefan cel Mare University of Suceava, has authored three books and has published on Romanian and Moldovan literary culture and visual media. He lives in Suceava, Romania.

Preface 1
Introduction: Bringing History into Focus 3
1. The Politics of Spectatorship: Romanianism and Romanianness On and Off Film 15
2. Film as the Litmus Test for National Independence: Tudor 32
3. Taking Stock of History in Real Time: The Extreme Long Shot of Romanian Historicals 56
4. The Dacian Legacy on Film 66
5. The Medieval Inheritors of the Ethnic Tradition: Stephen the Great, Michael the Brave, Vlad the Impaler 99
6. Where Does That Leave Us? The Story So Far 148
7. The 21st Century Makeover of the Genre 156
8. The Cultural Memory and Romanian Heritage Cinema 175
Chapter Notes 185
Bibliography 196
Index 211 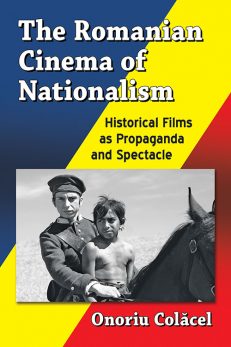 You're viewing: The Romanian Cinema of Nationalism $65.00
Add to cart