View cart “The Politics of Baseball” has been added to your cart.

The Politics of Baseball

Essays on the Pastime and Power at Home and Abroad

Examining baseball not just as a game but as a social, historical, and political force, this collection of sixteen essays looks at the sport from the perspectives of race, sexual orientation, economic power, social class, imperialism, nationalism, and international diplomacy. Together, the essays underscore the point that baseball is not just a form of entertainment but a major part of the culture and power struggles of American life as well as the nation’s international footprint.

Ron Briley is assistant headmaster and teaches history at Sandia Preparatory School in Albuquerque, New Mexico, where he has taught for more than thirty years. His baseball essays have been published in the annuals for the Cooperstown Symposium and in such journals as Baseball History and Nine. He is the author of several books and lives in Albuquerque.

PART ONE: BASEBALL AND DOMESTIC POLITICS

1. Baseball and Ballots: Players and Politicians

4. Bob Dole and the Brooklyn Dodgers

5. Are We There Yet? Major League Baseball and Sexual Orientation

6. Professional Baseball Wages in the Era of Integration

PART TWO: THE DIPLOMACY OF BASEBALL AND THE INTERNATIONAL GAME

9. The Nationalist Pastime: The Use of Baseball to Promote Nationalism Globally

11. Exporting the Horsehide American Dream: The Hidden Side of Nicaraguan Baseball

12. The Politics of American Colonialism Through the Lens of Major League Baseball Academies

16. Major League Baseball, Welcome Back Veterans, and the Rhetoric of “Support the Troops”

“Editor Briley has done a fine job of choosing and arranging the essays into a strong lineup…baseball intersects with many aspects of culture but none more important than politics, and Briley and his contributors have made a noteworthy contribution to the subject”—Nine. 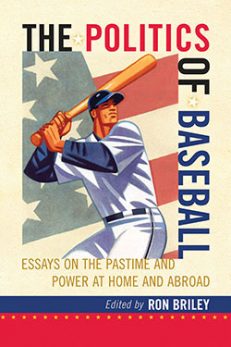 You're viewing: The Politics of Baseball $29.95
Add to cart