A History of the All-America Football Conference Team, 1946–1949

The Buffalo Bills of the National Football League have a fervent fan base; the city’s love affair with their football team dates back more than six decades. The Buffalo Bills were one of the strongest teams in the All-America Football Conference in 1948 and 1949, their final years of play. The team had such an impact on the city and on professional football that current franchise owner Ralph Wilson, when searching for a home for his American Football League team, settled in Buffalo and named the team in honor of the original Bills.

Kenneth R. Crippen is the president and former executive director of the Professional Football Researchers Association. He has researched and written about professional football history for over 20 years, and has won several awards for his work, and has been featured on National Football Post, Cold Hard Football Facts, The Packer Report, Coffin Corner, Fox Sports Radio, ESPN Radio and WGR (Buffalo). He lives in Warminster, Pennsylvania.

Review Fix: What inspired these books?

Ken Crippen: I was always interested in the history of pro football in Buffalo. That led me to look prior to the current franchise and learn more about the All-America Football Conference franchise: Buffalo Bills. Once I finished that book, I focused on the entire conference with the second book.

Review Fix: What was the writing and editing experience like for you?

Ken Crippen: I loved it, especially talking to all of the surviving players from those teams, as well as family members of coaches and administrators. It took a lot of work, but it was worth it to see the final product.

Review Fix: Did you learn anything you weren’t expecting?

Ken Crippen: Watching film of the games, it was apparent that the players were on par with the players in the NFL.

Review Fix: What else makes the teams featured here so special?

Ken Crippen: When you look at a team like the Cleveland Browns, people stated that they would not be able to compete in the NFL. Not only did they beat the two-time NFL champion Philadelphia Eagles twice in their first season in the league, they won the championship. They also went to the championship game six straight years, winning three championships. Adding that to their success in the NFL, they went to ten straight championship games, winning seven. They also went 29 straight games without a defeat. Think about that for a minute. They were on an undefeated streak as they won a championship, went undefeated all of the following season winning a championship, then went undefeated well into the next season on their way to another championship. No other team has been able to accomplish the same thing.

Review Fix: How do you think they’d fare in today’s NFL?

Ken Crippen: Cleveland proved that they could compete. Buffalo could have competed. The NFL absorbed the bulk of the players into the league. The AAFC could definitely have competed against the NFL if the NFL was not so afraid to play against them.

Ken Crippen: Anyone who enjoys the history of the game, as well as fans of franchises that made it into the NFL: Cleveland Browns and San Francisco 49ers. With the 49ers playing in the Super Bowl this year, it would be of interest to the fans to learn about the beginnings of their franchise and their players.

Ken Crippen: To let people know about this rival league to the NFL. Also, it is portrayed as a minor league and not of the same caliber as the NFL. That is incorrect. Players were at least as good if not better than the NFL. All of the players I have interviewed that have played in both leagues have stated the same.

Ken Crippen: I want to continue to write and research the history of the game.

Ken Crippen: For all San Francisco 49ers fans, you should definitely look into the history of your franchise and learn about the Hall of Famers that came out of the All-America Football Conference. 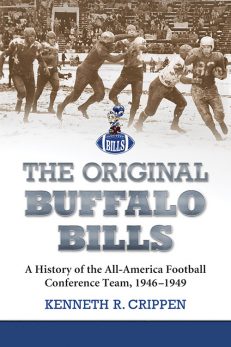 You're viewing: The Original Buffalo Bills $29.95
Add to cart