The Making of Stan Laurel

Echoes of a British Boyhood

As an adult, Stan Laurel (1890–1965) lived in the United States. As a boy, he lived in north-east England, the son of a prominent local theatrical figure. This ground-breaking biography examines Laurel’s family background, his formative years and his struggle to establish a show business career. Stan retained the emotional bonds forged in his youth throughout his life and visited his boyhood homes during his UK tours with Oliver Hardy.
Describing Stan Laurel’s key roles in making his films with his partner Oliver Hardy so successful internationally, the book analyzes how Stan’s boyhood experiences are often echoed in those films. It also notes his influence on successive generations of comic actors who, to this day, still pay fulsome tribute to him. Included is a selection of photographs relevant to Laurel’s boyhood, some related to themes in the Laurel and Hardy comedies.

Danny Lawrence is a retired sociologist from the University of Nottingham in England. He was born and raised a few hundred yards from Stan’s North Shields’ home. Visit his website at www.themakingofstanlaurel.com. 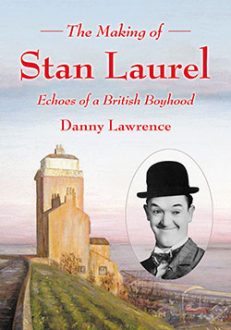 You're viewing: The Making of Stan Laurel $29.95
Add to cart