The History of a Postwar Prefabricated Housing Experiment

Advertised as “a new standard for living,” the Lustron Home was introduced in 1948 in response to the urgent need for housing for veterans returning from World War II and their rapidly growing families. These enameled steel, prefabricated houses became very popular, and were heavily promoted from 1948 to 1950. Approximately 2,500 went up all over the United States and even South America.
This work chronicles the history of the Lustron Corporation—how it got started and why it failed. The architectural differences between the six basic models of the Lustron Home, and how they could be built in as little as two days, are fully described. Also included is a listing that documents the location, model, color and various other particulars of the roughly 2,500 houses completed.

Contributing author Vincent Kohler is a visiting professor of American Studies at the Universidad Veracruzana in Xalapa, Mexico. 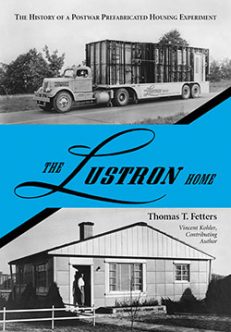