Rhetoric, Violence and Response in the American Southwest

The Ku Klux Klan’s persecution of Hispanics during the early 1920s was just as brutal as their terrorizing of the black community—a fact sparsely documented in historical texts. The KKK viewed Mexicans as subhuman foreigners supporting a Catholic conspiracy to subvert U.S. institutions and install the pope as leader of the nation, and mounted a campaign of intimidation and violence against them. Drawing on numerous Spanish-language newspapers and Klan publications of the day, the author describes the KKK’s extensive anti–Hispanic activity in the southwest.

Juan O. Sánchez is retired from Texas A&M University at Galveston. He lives near San Antonio. 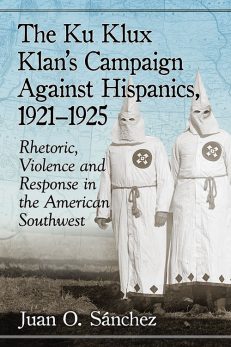