View cart “The Kaiser’s Confidante” has been added to your cart.

New York City native Mary Esther Lee (1837–1914) first married in 1864 the Prince von Noer, brother of the Queen of Denmark, and was created a princess in her own right after his death. An active philanthropist to Protestant causes, she then married Count Alfred von Waldersee whose close ties to the Prussian court made her an intimate friend of Kaiser Wilhelm II and a mentor and valued friend to his young wife. Although she preferred to remain in the background, Mary’s influence caused intense jealousy by those at court who resented her friendship with the kaiser and kaiserin. This biography chronicles the remarkable life of an American woman whose wealth and influence enabled her to rise to power in the Prussian royal court.

Richard Jay Hutto served as White House Appointments Secretary to the Jimmy Carter family and was chairman of the Georgia Council for the Arts. He is an internationally recognized speaker and historical consultant often appearing in televised adaptations of his work. He lives in Macon, Georgia, and can be reached at www.poisonedlife.com. 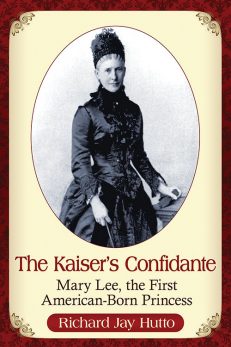 You're viewing: The Kaiser’s Confidante $29.95
Add to cart