The subject of one of the great advertising campaigns of the early 20th century, the “Somewhere West of Laramie” ads, Jordan is a well-remembered marque despite its brief duration.
Edward Stanlaw “Ned” Jordan was born November 21, 1882, in Merrill, Wisconsin, and worked as a journalist before finding work in the automobile industry. A pioneer of automobile advertising and sales who got his start with Thomas B. Jeffery and Company in 1907, he founded the Jordan Motor Car Company with fellow Jeffery employees Russell S. Begg as experimental engineer and Paul Zens as purchasing agent in 1916.
This book is both a biography of Ned Jordan and a history of his company and its vehicles from its beginning in 1916 to its end on April 1, 1932, when non-payment of franchise taxes forced its dissolution. Jordan’s first models were four- and seven-passenger custom-type touring cars, but it would become famous for the Sport Marine, the Playboy, the Little Tomboy, and the Little Custom Jordan. Spectacularly illustrated.

Retired construction electrician James H. Lackey is a charter member of the Jordan Register and has been its historian for many years. The restorer and owner of an award-winning 1923 Jordan Playboy, he lives in Huntington, West Virginia. 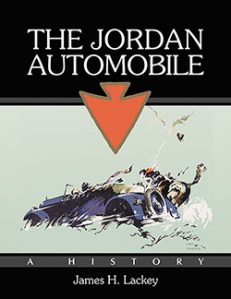 You're viewing: The Jordan Automobile $35.00
Add to cart