A Chronology of Studio Sessions, Live Performances and Chart Positions

Jan & Dean were among the most successful artists of the late 1950s through the mid–1960s, with hits including “Baby Talk,” “Surf City,” “Dead Man’s Curve” and “The Little Old Lady (From Pasadena).” Slapstick humor and offbeat personas were a big part of their shtick, but Jan Berry was serious when it came to the studio. This book chronicles Jan’s career as a songwriter and arranger—and his tenure as producer for Jan & Dean and other acts—with day-by-day entries detailing recording sessions, single and album releases, concerts and appearances, film and television projects, behind-the-scenes business and legal matters, chart positions and more. Extensive commentary from Berry’s family, friends and colleagues is included. Studio invoices, contract details, tape box notes, copyright information and other particulars shed light on how music was made in the Hollywood studio system of the 1960s.

Mark A. Moore is a technical writer for the North Carolina Department of Information Technology and he has written various articles and album liner notes about Jan & Dean. He lives in Raleigh, North Carolina.

• “A rich trove of information…recommended”—ARBA

• “This book covers Jan’s and the duo’s history from 1958–1969 on an almost daily basis, and several thousand hours of research must have gone into this undertaking. Many comments, memories, letters and personal anecdotes of Berry’s friends and family add up to a very detailed portrait of this important musician…tons of information, completed by almost 170 pictures, some of them rare—popcultureshelf.com

• “There’s a level of detail here that is unprecedented. It’s an extraordinary book in which the sheer volume of minutiae combines to engulf the reader and immerse them completely in the world of Jan Berry. The level of detail in the chronology is nothing short of astonishing…thoroughly absorbing…an outstanding monument to Berry’s many accomplishments. Beyond definitive, it raises the bar for the rock chronology format to a level that may never be surpassed”—Ugly Things

• “Whoever is in search of the perfect discography and the complete overview of all appointments of his favorite artist will envy the fans of Jan & Dean for this work. The author describes everything imaginable, which happened to the two stars of the Surf Music Scene in the years 1958 to 1969.”—Country Mag

• “This is a long awaited and thoroughly engaging book author Mark Moore has put together on the music, careers, and personal lives of the enormously successful music duo Jan & Dean. It is filled with details of all their business transactions, personal lives, and music sessions including the musicians and singers who were on those sessions, many of whom are featured in the film, The Wrecking Crew. Of particular interest to me is the chronology of Jan Berry’s personal and professional development from his high school days, where his interest in music began, all the way up to his passing in 2004. He was an amazingly talented, ambitious, and dynamic person. For me it is an especially poignant read learning about Jan’s early life and discovering professional details I didn’t know about during my 5 years with him as his partner and collaborator. It filled in many blanks in our personal history. This is a comprehensive and fascinating read for anyone interested in music of the ’60’s in which Jan & Dean were enormously influential.”—Jill Gibson, songwriter, painter and sculptor, former member of the Mamas & the Papas, Jan Berry’s former girlfriend and collaborator

• “Not even the Beatles have had so much detail on their career written in one book.  If it is not in these pages, then it probably never happened. Rarely is the history of anything so well recorded. It’s the only book that accurately tells the story behind my writing of “The Road Back From Dead Man’s Curve” for Rolling Stone (1974), which led to the film about Jan & Dean titled Deadman’s Curve (1978). It’s also a lifetime story, the author’s love of everything Jan & Dean.”—Paul Morantz, Escape: My Lifelong War Against Cults and From Miracle to Madness: The True Story of Charles Dederich and Synanon

• “I liked it a lot…. [Mark A. Moore] did a lot of research. And I actually used it to come up with specific dates and stuff that I didn’t remember, for my book. So it became very helpful to me, at least to make it a little bit more detailed by knowing the actual date that something happened. So I thanked him for that…. The Jan & Dean Record was a lot of work…. God, it made me tired just reading it.”—Dean Torrence, of Jan & Dean, author of Surf City: The Jan & Dean Story

• “An amazing chronology. I’m completely amazed by this incredible book. This book should be in every music education section of all libraries. An entire world of Rock and Roll history and memorabilia awaits at your fingertips. I had the chills just reading this compilation of one of the greatest duos of the Rock and Roll era…. For me, just memories that make the hair on the back of my neck stand up among the goosebumps. The kids, as I refer to them, were just kids when I was first introduced to these wild and crazy guys. Not only contracting for them but also recording, dual drums, for Jan & Dean hits…hitting the road at times with them, on stage, and ‘sort of’ road managing…. They were teenage idols of the Rock world. Jan experimented with me and the great Earl Palmer on dual drums…. I was so proud to have been a part of their lives and their skyrocket ride to fame and fortune. You will read all about it, and all of their hits…. So get comfortable and enjoy their explosive ride…. Author Mark Moore worked for so many incredible years getting this special story perfect. No doubt a poignant film will emerge, perhaps worthy of an Oscar.”—Hal Blaine, of the Wrecking Crew, the world’s most famous drummer. Hal played on many sessions for Jan Berry and Jan & Dean in the 1960s 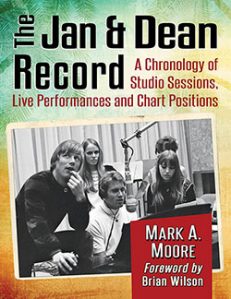