The Indians of the Nipmuck Country in Southern New England, 1630–1750

The North American Indian group known as the Nipmucks was situated in south-central New England and, during the early years of Puritan colonization, remained on the fringes of the expanding white settlements. It was not until their involvement in King Philip’s War (1675–1676) that the Nipmucks were forced to flee their homes, their lands to be redistributed among the settlers. This group, which actually includes four tribes or bands—the Nipmucks, Nashaways, Quabaugs, and Wabaquassets—has been enmeshed in myth and mystery for hundreds of years. This is the first comprehensive history of their way of life and its transformation with the advent of white settlement in New England. Spanning the years between the Nipmucks’ first encounters with whites until the final disposal of their lands, this history focuses on Indian-white relations, the position or status of the Nipmucks relative to the other major New England tribes, and their social and political alliances. Settlement patterns, population densities, tribal limits, and land transactions are also analyzed as part of the tribe’s historical geography. A bibliography allows for further research on this mysterious and often misunderstood people group.

Retired teacher and media specialist Dennis A. Connole spent 32 years in the Worcester school system. He is the author of three books and numerous scholarly articles and lives in Worcester, Massachusetts.

1 Introduction: The Indians and the Country      7

5 Colonial Authorities Go to the Aid of the Nipmucks      70

8 Conflict in English and Indian Attitudes Regarding Land Ownership: The Story of John Wampas      122 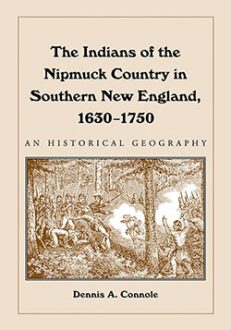