View cart “The Hunt for a Reds October” has been added to your cart.

The Hunt for a Reds October

In 1869, the Cincinnati Red Stockings became the first all-professional baseball club. The history, geography, demography and economy of the area made Cincinnati a baseball town par excellence. During pro ball’s early years, the city was almost always represented by a club called the Reds. In 1903 Reds owner Garry Hermann helped broker peace between the National and American leagues and became known as the “Father of the World Series.” The Reds won the Series in 1919, 1940, 1975, 1976 and 1990.
Under the ownership of the controversial Marge Schott and managed by the mercurial Lou Piniella, the 1990 Reds led the National League West, defeated the Pittsburgh Pirates in the NL Championship Series and swept the Oakland Athletics in the World Series. Stars such as Barry Larkin and Eric Davis—along with pitcher Jose Rijo and the trio of relievers known as the Nasty Boys—deserve much of the credit that year but lesser knowns like Billy Hatcher and Glenn Braggs made significant contributions. They have come close but the Reds have not won another pennant since.

2. Designed to Break Your Heart 74

“a compelling and enlightening examination of the last World Series-winning Reds club”—Journal of Sport History. 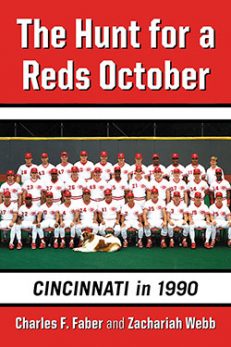