View cart “The Health of the First Ladies” has been added to your cart.

The Health of the First Ladies

This first comprehensive study of the medical histories of America’s first ladies—from Martha Washington to Michelle Obama—discusses their illnesses, their treatments and their physicians in the context of their times. As the categories of illness afflicting Americans have changed through history so have the kinds of maladies affecting the first ladies. Infectious diseases and the consequences of poorly supervised pregnancies have been replaced by cerebrovascular accidents and malignancies.
The secrecy with which the White House has traditionally handled inquiries about the health of the president’s wife is explored in detail; however, several first ladies, notably Betty Ford, have been transparent about their illnesses in order to educate the public. The effects of a first lady’s responsibilities on her health is examined. This book also seeks to discern how the well-being of the first lady influences presidential performance.

Part I: Before the Advent of Modern Medicine

One. Martha Washington and Dolley Madison: The First First Lady and the First Mistress in the White House 11

Eight. Ida McKinley and the Audition of the First White House Physician 85

Eleven. Homeopathic Physicians and the Kidney Disease of Florence Harding and Grace Coolidge 122

PART III: MODERN TIMES AND INTO THE TWENTY–FIRST CENTURY

Seventeen. The Diseases, Burdens and Confidentiality of First Ladies 179

“Deppisch has written an extensively detailed book with copious notes. He emphasizes the women’s health during their time in the White House, thus tracing the rise of modern medicine in the U.S. and common health practices from the Revolutionary War to the present…recommended”—Choice; “the first book to comprehensively recount details of the health of the most important person in a president’s life: his spouse”—Johns Hopkins Medicine. 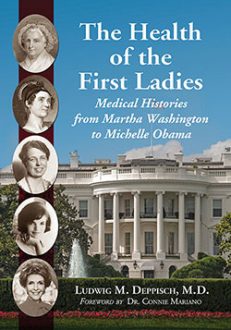 You're viewing: The Health of the First Ladies $39.95
Add to cart