The Haymakers, Unions and Trojans of Troy, New York

The Troy Haymakers were a pioneer baseball team legendary for exploits on and off the field. Formed in 1860 in Troy, New York—a rapidly growing industrial city—the team was embraced by the tough-minded Trojans as emblematic of their vigorous boomtown, rivaling larger, better established cities.
The Haymakers were a strong amateur club before becoming a charter member of baseball’s first major league, the National Association, and subsequently gaining a franchise in the National League. The team rosters were filled with characters and scalawags along with talented players, including four future Hall of Famers. After losing its National League franchise in 1882, Troy fielded minor league teams for 34 years—with a wistful eye to Haymaker history.

One. Troy Baseball in the Amateur and Early Professional Era  9

Three. The National Association and the Wilds of Independent Baseball  56

Four. National Leaguers at the Gates of Troy  96

Seven. The Legacy of the Haymakers  187

“Jeff has captured the essence of what it was like to live in Troy, New York and by extension most of the northeast in the 19th century. Baseball; with all of its statistics and drama, drew white and blue collar workers; women and children; old and young; to come together by the thousands to root for their home team, The Haymakers! We have the Haymakers to thank for our enduring love of the game of baseball to this day!”—Kathryn Sheehan, Rensselaer County Historian and Registrar of the Rensselaer County Historical Society. 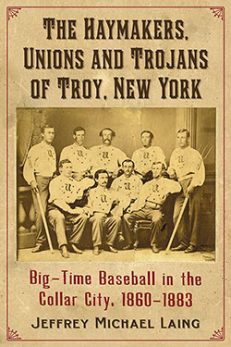 You're viewing: The Haymakers, Unions and Trojans of Troy, New York $29.95
Add to cart