View cart “The Half-Game Pennant of 1908” has been added to your cart.

The 1908 American League pennant race was described as a “a fierce and fluctuating fight.” With five games left in the season, each of the league’s four westernmost teams still had a shot at the championship. It was the height of the Deadball Era, noted for its spectacular pitching, low scoring, quickly played games, and memorable characters. It was also a time when professional baseball truly came into its own as America’s national pastime. This lively account details a neglected chapter in the game’s history.

Charles C. Alexander, Distinguished Professor of History Emeritus, Ohio University, has written 14 books, the last eight of which have dealt with American baseball history. He lives in Hamilton, Ohio.

Preface 1
Introduction: “Slobber tobacco juice all over a nice, new white baseball” 3
One. “Nothing to the championship in the American League except the St. Louis club” 13
Two. “Tie a rope to him” 34
Three. “A high art exhibition yesterday with wet and dry goods” 53
Four. “Trying to make an umpire out of a boneless codfish” 69
Five. “Lucky to get safely to his hotel” 89
Six. “That game meant more to me than any game I ever saw” 111
Afterword: “That one game would have been enough” 143
Chapter Notes 153
Bibliography 157
Index 161 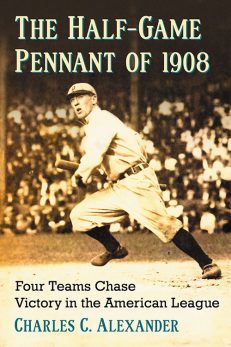