Essays on the Undead in Popular Culture Around the World

The media vampire has roots throughout the world, far beyond the shores of the usual Dracula-inspired Anglo-American archetypes. Depending on text and context, the vampire is a figure of anxiety and comfort, humor and fear, desire and revulsion. These dichotomies gesture the enduring prevalence of the vampire in mass culture; it can no longer articulate a single feeling or response, bound by time and geography, but is many things to many people. With a global perspective, this collection of essays offers something new and different: a much needed counter-narrative of the vampire’s evolution in popular culture. Divided by geography, this text emphasizes the vampiric as a globetrotting citizen du monde rather than an isolated monster.

Cait Coker is associate professor and curator of rare books and manuscripts at the University of Illinois, Urbana-Champaign. Her research focuses on genre history, women’s writing, and the history of women in publishing.

Afterword by Amanda Jo Hobson and U. Melissa Anyiwo

Europe and the Mediterranean
“The creatures of the night, what bad jokes they make!”: Racism, “True” Humor and the Nationalistic Vampire on Film (Simon Bacon) 77
Amid and Beyond Gender(s): The Vampire as a Locus of Gender Neutrality in John Ajvide Lindqvist’s Let the Right One In (Marie Levesque) 90
The Economic Miracle and the Italian Undead in Tempi duriper i vampiri (Fernando Gabriel Pagnoni Berns) 104
“Time is an abyss”: The Role of History in Werner Herzog’s Nosferatu (1979) (Thomas Prasch) 116
There’s Water Here: Cities, Safety and the Global Environment in Jim Jarmusch’s Only Lovers Left Alive (Karen E. Viars) 128

Asia and Australia
From Sunnydale to Seoul: The Vampire “Fan” in Korean Dramas (Cait Coker) 143
“Don’t adjust your life to mine”: Moon Child, Homoeroticism and the Vampire as Multifaceted Other (Miranda Ruth Larsen) 153
Aboriginal Australian Vampires and the Politics of Transmediality (Naomi Simone Borwein) 165
“In need of vitamin sea”: The Emergence of Australian Identity Through the Eyes and Thirst of Kirsty Eager’s Vampires (Phil Fitzsimmons) 177

Globalism: Real and Virtual Worlds?
The Ecohorror of The Strain: Plant Vampires and Climate Change as a Holocaust (Tatiana Prorokova-Konrad) 189
“Set to drain”: Vampirism as Mechanic and Metaphor in The Elder Scrolls IV: Oblivion (Trevor Dodge) 200

• Lord Ruthven Award — International Association for the Fantastic in the Arts

• “This collection offers many layers of what it means to be vampiric and brings a mixture of theories to the discussion; whether you are a student of race, feminism, gender, sexuality, history, hybridity, or nationalism, you will find something here to support your research… This book is both enjoyable and informative; the writing is professional, clear, and interesting. It is not every scholarly book which one can describe as fun and entertaining, but this was both.”—Journal of Popular Culture 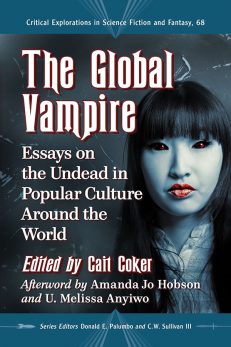