The Films of Randolph Scott

Reclusive American actor Randolph Scott, known for his subtle, dignified performances in almost 60 westerns, has been called the “most genuine Westerner.” His career began in 1928 with the first of several bit parts; his first starring role was 1932’s Heritage of the Desert. He fought in World War I, studying horsemanship, shooting, and bayoneting, and acted in a variety of films in every genre from musical to swashbuckler. His final film was Ride the High Country (1962).
Chronologically arranged from his birth in 1898 to his death in 1987, this book covers every film in which Randolph Scott acted. Each section begins with a biographical chapter and then lists Scott’s films from that period: each film’s entry has filmographic information, a synopsis, and detailed commentary, discussing such topics as the financial aspects, production details, acting, other participants, anecdotes, and critical responses. Quotes from interviews with figures in the industry and published reviews bolster the entries. A bibliographical essay completes the work, which is heavily illustrated with stills and promotional materials.

Robert Nott is a staff writer for The Santa Fe New Mexican. He lives in Santa Fe, New Mexico. 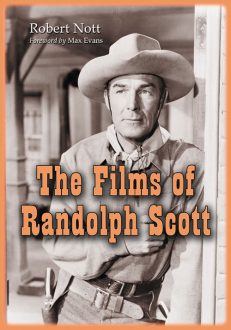 You're viewing: The Films of Randolph Scott $29.95
Add to cart