The Films of Fay Wray

Widely acclaimed as a horror movie actress, Fay Wray is best remembered for her performances in King Kong and four other classic 1930s film thrillers, Doctor X, The Most Dangerous Game, Mystery of the Wax Museum and The Vampire Bat. Yet Wray appeared in 77 feature films between 1925 and 1958, playing leading roles in 67. Many of her films, including her entire silent film output, have been lost or are available only on a limited basis.
This heavily illustrated filmography at last makes obvious her sizeable contribution to the film industry. After an overview of her professional acting career, the filmography is divided into three sections. The first introduces Wray’s early silent feature film appearances; the second covers her “leading lady” period in popular horror thrillers and other films in the sound era; and the third covers her latter-day supporting roles. Appendices document her work in film shorts and her television appearances. Commentary throughout includes first-person interviews with Fay Wray.

Roy Kinnard is the author of many books on such topics as Flash Gordon, science fiction serials, Fay Wray, horror, silent films and Willis O’Brien. His essay on the Flash Gordon serials, written at the invitation of the Library of Congress, appears on the website of the National Film Registry. He lives in Chicago.
Commercial artist Tony Crnkovich, co-author (with Kinnard) of The Films of Fay Wray and The Flash Gordon Serials, has produced movie-related artwork and written articles for Classic Images. He lives in Chicago.

Introduction: The Queen of Screams      1

Appendix I. Appearances in Theatrical Shorts      171

“the picture quality is breathtaking”—Classic Images; “I cannot think of a better book to recommend…a wealth of information”—Scary Monsters; “the book is as appealing as its subject…sports the most generous collection of Fay Wray photos seen anywhere…the book to beat…will make any Kong fan smile”—Monsters From The Vault. 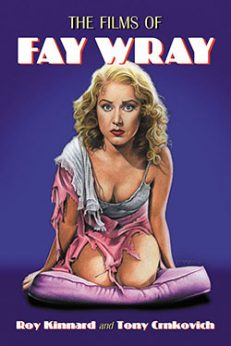