“The shells of the enemy flew over us here tearing great limbs off the trees and screaming horribly … then a shell struck into the ranks near where I was, killing and wounding five or six—I saw them fall and heard their screams. But on we went and I know not who they were or what became of them”—September 21, 1862. NeLt. Col. Colby served with the 23rd New York, the 107th New York at Antietam, Chancellorsville and Harper’s Ferry, and later in the Veteran Reserve Corps as superintendent of Old Capital Prison. This is a compilation of Colby’s letters to family, friends and military personnel, newspaper articles that detail the fighting in which Colby and his fellow soldiers were involved, and accounts of the fighting and daily life from other soldiers. Colby crossed paths with many prominent figures in the war and was recognized as an excellent soldier by his peers and commanding officers.

William E. Hughes, the editor, is the great-great-grandson of Lt. Col. Colby. A retired educator and member of Old Baldy Civil War Round Table, he lives in Vineland, New Jersey. 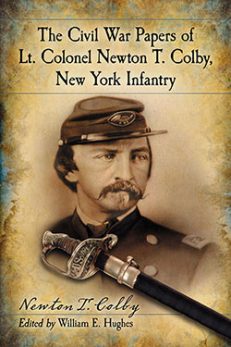