The Architectural Ideology of Thomas Jefferson

In contrast to his enormous political influence, Thomas Jefferson’s vast cultural contributions, especially in the realm of American architecture, remain relatively unknown to mainstream Americans. Among architectural professionals, however, Jefferson is immediately recognized as one of the most influential architects of all time. Although he was considered a “gentleman architect,” Jefferson honed his skills as well as any professional. His three most notable visionary works at the Virginia State Capitol, the educational complex at the University of Virginia, and his own home at Monticello remain monumental in the field of American architecture and society. This volume reveals how Jefferson’s politics and architecture coexisted and explains how he marked his political maturation through corresponding architectural monuments that reflected his ideals. Consequently, Jefferson provided America with a combined architectural and political ideology with the intention of safeguarding the future of liberty and democracy in America.

Ralph G. Giordano, an architect in New York, teaches history and American studies and is the author of five books. 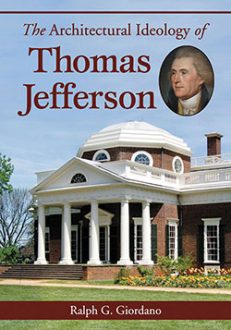 You're viewing: The Architectural Ideology of Thomas Jefferson $39.95
Add to cart