The Parallel Lives of Joshua L. Chamberlain, USA, and John B. Gordon, CSA, Commanders at the Surrender Ceremony of April 12, 1865

Joshua L. Chamberlain of Maine and John B. Gordon of Georgia led the Union and Confederate armies, respectively, at the formal surrender ceremony at Appomattox Courthouse, Virginia, on April 12, 1865. In one of the most dramatic and memorable moments of the Civil War, as the Confederate soldiers marched through the Union lines to stack their weapons and flags, Chamberlain, moved by the historic moment and desiring to pay honor to a valiant, defeated foe, ordered his Union soldiers to salute Gordon’s Confederates. Gordon, surprised but stirred by the same emotion, immediately responded, and ordered his men to return the salute. Both men had volunteered for military service, feeling a strong need to fight for their respective causes. They entered military service as low level officers with no formal military training. Repeatedly, they exhibited exceptional aptitude and responsibility, rising through the ranks as they received the glowing accolades of their superiors. Yet, they remained humble, continually demonstrating extraordinary courage, which earned them the respect of their men. Ultimately, their heroism and leadership culminated in their meeting as the commanders at the Appomattox Courthouse surrender. After the war, Chamberlain and Gordon entered politics in their respective states.

John W. Primomo is a retired United States Magistrate Judge for the Western District of Texas in San Antonio. 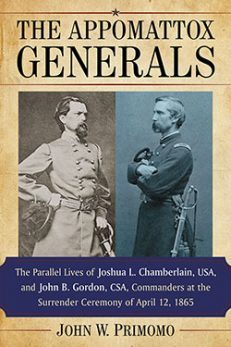 You're viewing: The Appomattox Generals $29.95
Add to cart