View cart “The 758th Tank Battalion in World War II” has been added to your cart.

In 1941, the U.S. Army activated the 758th Tank Battalion, the first all-black armored unit. By December 1944 they were fighting the Axis in Northern Italy, from the Ligurian Sea through the Po Valley and into the Apennine Mountains, where they helped breach the Gothic Line—the Germans’ last major defensive line of the Italian Campaign.
After the war the 758th was deactivated but was reformed as the 64th Tank Battalion, keeping their distinguished insignia, a tusked elephant head over the motto “We Pierce.” They entered the Korean War still segregated but returned fully integrated (though discrimination continued internally). Through the years, they fought with almost every American tank—the Stuart, the Sherman, the Pershing, the Patton and today’s Abrams.
Victorious over two fascist (and racist) regimes, many black servicemen returned home to what they hoped would be a more tolerant nation. Most were bitterly disappointed—segregation was still the law of the land. For many, disappointment became a determination to fight discrimination with the same resolve that had defeated the Axis.

The son of a tanker in the 758th and 761st, Joe Wilson, Jr., is a systems accountant in Washington, D.C. He has also written for World War II magazine. 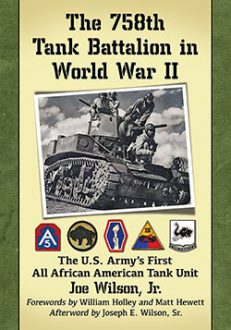