Television Western Players of the Fifties

A Biographical Encyclopedia of All Regular Cast Members in Western Series, 1949–1959

Modeled after the Mack V. Wright 1920 film version, the 1949 western television series The Lone Ranger made Clayton Moore’s masked character one of the most recognized in American popular culture. Other westerns followed and by 1959 there were 32 being shown daily on prime time television. Many of the stars of the nearly 75 westerns went on to become American icons and symbols of the Hollywood West. This encyclopedia includes every actor and actress who had a regular role in a television western from 1949 through 1959. The entries cite biographical and family details, accounts of how the player first broke into show business, and details of roles played, as well as opinions from the actors and their contemporaries. A full accounting of film, serial, and television credits is also included. The appendix lists 84 television westerns, with dates, show times, themes, and stars.

Everett Aaker has written reference books on television western actors and actresses of the fifties and early television crime fighters. He was a finalist in the BBC quiz shows Film Buff of the Year and Screen Test in which his subject was George Raft. He lives in England. 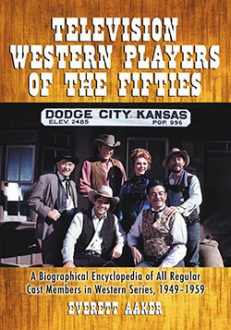 You're viewing: Television Western Players of the Fifties $49.95
Add to cart