Essays on Communication and Reality Television

This collection of scholarly essays examines reality television. The first show, Survivor, inspired a national craze when it aired in the summer of 2000. Ever since, successors and copycats have been on each of the four largest networks. The basics stay the same: put a group of people into situations bound to cause conflict, and watch them squirm. Rather than criticize the series’ voyeuristic appeal, this work evaluates what goes on within the text of such shows and how they reflect or affect our larger culture. Contributors include researchers from communications, sociology, political science, and psychology. The contributions cover such topics as reality television’s relationships with cultural identity, publicity rights, historical perspectives, trust, decision-making strategies, political rationality, office politics, and primitivism. Each chapter includes a bibliography. Instructors considering this book for use in a course may request an examination copy here.

Matthew J. Smith is professor and director of the School of Communication at Radford University, where he teaches courses in media studies, including graphic storytelling. He lives in Blacksburg, Virginia.

Andrew Wood is an assistant professor at San Jose State University in California, where he teaches courses in computer mediated communication, rhetoric, and popular culture.

Introduction: Culture, Communication, and Community Revealed in and through Reality Television      1

PART II. LESSONS ABOUT PLAYING SOCIAL GAMES
5. Reel Life: The Social Geometry of Reality Shows      73
6. The Nonverbal Communication of Trustworthiness: A Necessary Survivor Skill      97
7. Metaphors of Survival: A Textual Analysis of the Decision-Making Strategies of the Survivor Contestants      111
8. Survivor, Social Choice, and the Impediments to Political Rationality: Reality TV as Social Science Experiment      132

PART III. LESSONS BEYOND THE LENS
9. Mutual Metaphors of Survivor and Office Politics: Images of Work in Popular Survivor Criticism      153
10. Self-Help for Savages: The “Other” Survivor, Primitivism, and the Construction of American Identity      182
11. The Communication Ethics of Survivor      199
12. Traveling the Terrain of Screened Realities: Our Reality, Our Television      213 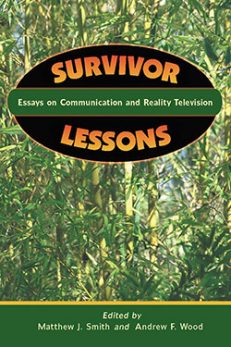