A Memoir of the Holocaust

This vividly detailed memoir describes the experiences of a Holocaust survivor who narrowly escaped death by living a childhood of constant vigil and, along with his family, continuously dodging the ever-present threat of a Nazi capture.
After the Nazi invasion of Poland, the Bergman family’s hometown became an increasingly dangerous city in which to live, as evidenced by the author’s account of being struck deaf by the butt of a German soldier’s rifle while playing in the street with other children. Though traumatic and certainly life-threatening, this vicious attack would ultimately save his life several times. The story continues with vivid accounts of the family’s narrow escapes to (and from) the Lodz, Warsaw, and Czestochowa ghettos, describing some of the more horrific vignettes of life in the Jewish ghetto and detailing how some members of the family survived through a fortuitous combination of luck, skilled deception, and an underlying will to live.

Eugene Bergman is a retired professor of English at Gallaudet University. He lives in Bethesda, Maryland. 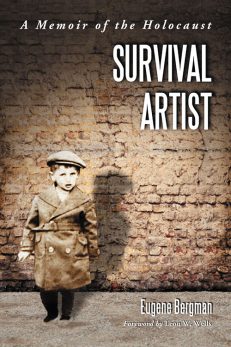