Countercultural Messages of Films from Frankenstein to the Present

Horror cinema flourishes in times of ideological crisis and national trauma—the Great Depression, the Cold War, the Vietnam era, post–9/11—and this critical text argues that a succession of filmmakers working in horror—from James Whale to Jen and Sylvia Soska—have used the genre, and the shock value it affords, to challenge the status quo during these times. Spanning the decades from the 1930s onward it examines the work of producers and directors as varied as George A. Romero, Pete Walker, Michael Reeves, Herman Cohen, Wes Craven and Brian Yuzna and the ways in which films like Frankenstein (1931), Cat People (1942), The Woman (2011) and American Mary (2012) can be considered “subversive.”

“thoroughly detailed and enjoyably written book is an important addition to the continually expanding list of studies devoted to genre film theory”—Exquisite Terror; “horror is the thinking person’s genre, and this book is brain candy for the critical horror fan. Thoroughly researched and referenced…bound to tickle your thinking bone”—Rue Morgue; “excellent addition to the shelves or tablets of any horror scholar”—Dead Reckonings; “spectacular…thoughtful…. This highly entertaining collection of essays is informative and engaging and is easily recommended”—horrortalk.com; “the best books about film have the unique quality of feeling like they’re betraying the medium upon which they’re expressing their ideas; that is, they make you want to stop reading and go watch the films they’re discussing. Of course, in most instances these books also serve as handy guides to help you discover elements concealed in the films in question, as well as open your eyes to help you rediscover films you thought you already knew. [This] is one of those books…the scholarly authority and thorough research presented…makes for a pleasurable read”—popmatters.com; “fascinating and thought-provoking book…intelligent, well written and insightful read…highly recommended”—starburstmagazine.com. 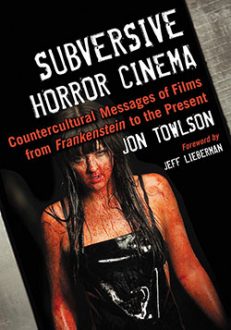