How Science Fiction, Fantasy and Horror Conceived the Twentieth Century

Speculative modernists—that is, British and American writers of science fiction, fantasy and horror during the late 19th and early 20th centuries—successfully grappled with the same forces that would drive their better-known literary counterparts to existential despair. Building on the ideas of the 19th-century Gothic and utopian movements, these speculative writers anticipated literary Modernism and blazed alternative literary trails in science, religion, ecology and sociology. Such authors as H.G. Wells and H.P. Lovecraft gained widespread recognition—budding from them, other speculative authors published fascinating tales of individuals trapped in dystopias, of anti-society attitudes, post-apocalyptic worlds and the rapidly expanding knowledge of the limitless universe. This book documents the Gothic and utopian roots of speculative fiction and explores how these authors played a crucial role in shaping the culture of the new century with their darker, more evolved themes.

William Gillard teaches creative writing and literature at the University of Wisconsin Oshkosh and is the author of six books. He lives in Appleton, Wisconsin.

James Reitter is an associate professor of English and film studies at Dominican College of Blauvelt in Orangeburg, New York. He publishes poetry in magazines and journals.

Robert Stauffer specializes in medieval and Renaissance literature at Dominican College of Blauvelt in Orangeburg, New York. He has published science-fiction and articles on baseball.

Acknowledgments vi
Preface 1
Introduction 5
1. Utocalypse 15
All Will Be Well: The Utopian Roots of Speculative Modernism 17
The Screw Turns: Bleak Reality Murders Optimism 22
­Anti-Utopians: The Individual Versus Society 31
Conclusion 40
2. Shadows at the Turn 42
Gothic Origins of Speculative Modernism 46
Gothic Extensions: Doppelgängers to Vampires 50
Ghosts and the Unexplained 55
Conclusion 73
3. This Island Earth: Nature vs. Speculative Modernists 75
Science Will Bend Nature to Serve Humanity: The Utopian Perspective 79
There Are Things We Can Never Know: The Purple Cloud and the Limits of Science 86
Beyond This Place and Time: The Natural World Will Outlast Us 90
Weaponizing Nature: Understanding the Non-Human World in Order to Destroy It 96
Conclusion 100
4. Worlds Beyond 102
What Do We Really Have to Offer? 106
They Want What We Want 114
“We’re Down; We’re Beat”: Humanity’s Defeat 121
Conclusion 130
5. Machinocracy 132
A Species in Distress: Machines Will Save Humanity 135
Sand in the Gears: Machines Can’t Save Us 139
Building the Perfect Gun: Machines Will Kill Us All 146
Conclusion 156
6. Divine Secrets 157
The Benevolent Universe: Spiritual Rewards for the Speculative Modernist 161
Cruel Reality: Monsters Lurking Beyond the Veil 172
The Neutral Universe: Our Truth Lies Within Ourselves 180
Conclusion 185
7. We Are Fortunately Flawed 187
Sherlock Holmes: Ego and ­Ultra-Rationalism 190
Tarzan: Natural Law and the Laws of Man 194
Buck Rogers: Future Perfect 198
King Kull: Governing by Axe 199
Conan the Cimmerian: Blood on Steel 201
Jirel of Joiry: Darkness and Light 204
Conclusion 206
Epilogue 209
The Editorial Tastemakers 209
The Book Publishers Who Made the Old New Again 212
Conan as Chronicle 214
Chapter Notes 217
Works Cited 225
Index 239 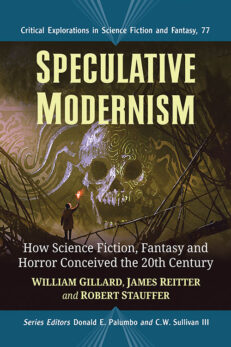