Sexualities in the Works of Joss Whedon

Joss Whedon’s works, across all media including television, film, musicals, and comic books, are known for their commitment to gender and sexual equality. They have always encouraged their audiences to love whomever, and however, they wish. This book is a history of the sexualities represented in the works of Joss Whedon and it covers all of Whedon’s genres, including fantasy, horror, science fiction, westerns, superhero stories, and Shakespearean comedy.
Unique for its consideration of the entire arc of Whedon’s two-decade career, from the beginning of Buffy the Vampire Slayer’s first season in 1997 through the conclusion of its twelfth (comic book) season in 2018, this book examines in detail both better-known queer sexualities of the LGBTQ+ spectrum, and lesser-known non-normative sexualities. The book includes chapters on Whedon’s sexually dominant women and submissive men, sexual pluralism on Firefly, disabled sexualities in Whedon’s superhero narratives, zoophilia in Buffy, queer and heteronormative sexualities in Dr. Horrible’s Sing-Along Blog, the subversion of the sexual tropes of slasher films in The Cabin in Woods, and dominance and submission in Whedon’s Much Ado About Nothing.

Lewis Call is a professor of history at California Polytechnic State University, San Luis Obispo. He has written extensively about representations of sexualities in the works of Joss Whedon and his co-creators, including LGBTQ+, BDSM, fetishism, and disabled sexualities. He lives in San Luis Obispo, California.
Sherry Ginn is a retired educator currently living in North Carolina. She has authored books examining female characters on science fiction television series as well as the multiple television worlds of Joss Whedon. Edited collections have examined sex in science fiction, time travel, the apocalypse, and the award-winning series Farscape, Doctor Who, and Fringe.

Acknowledgments viii
Foreword by Mary Ellen Iatropoulos 1
Preface: “Kinky Business” 5
Introduction: “Love Dares You” 9
One. “It’s About Power”: The Rise of the Whedonesque Dominant Woman, or Whedomme 39
Two. “Love Keeps Her in the Air”: Radical Sexual Pluralism Aboard Firefly Serenity 61
Three. “The Breakable Ones”: Disabled Sexualities in Joss Whedon’s Superhero Narratives 87
Four. “Majestic Creature of Legend”: Human/Animal Hybridity and Zoophilia in the Buffyverse 112
Five. “The Hammer Is My Penis”: Queer and Heteronormative Sexualities in Dr. Horrible’s ­Sing-Along Blog 135
Six. “They Want to See Us Punished”: Subverting the Sexual Tropes of the Slasher Film in The Cabin in the Woods 156
Seven. “To Bind Me, or Undo Me”: Dominance and Submission in Joss Whedon’s Much Ado About Nothing 178
Afterword: Reconsidering Whedonversal Sexualities in the #MeToo Era 203
Chapter Notes 207
Bibliography 211
Index 227 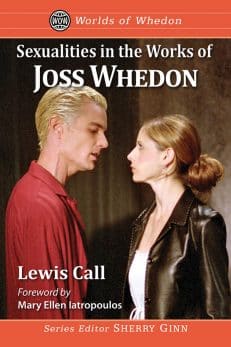 You're viewing: Sexualities in the Works of Joss Whedon $39.95
Add to cart