This is a comprehensive comparative analysis of the screwball comedy and film noir genres—two popular Hollywood staples that emerged around the same time. Despite their contrast in tone and theme, “Screwball” and “Noir” have many narrative elements in common.
The author defines the two genres, discusses their historical development and inter-related conventions, and offers detailed comparative analyses of a number of films, among them The Lady Eve and His Girl Friday (screwballs), and Gilda and Sunset Blvd. (noirs).

Thomas C. Renzi is an administrator and instructor at Buffalo State College in Buffalo, New York. 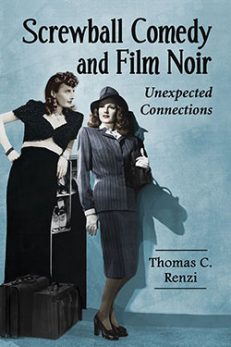 You're viewing: Screwball Comedy and Film Noir $29.95
Add to cart