The Changing Image of American Indians in Westerns

The history of American Indians on screen can be compared to a light shining through a prism. We may have seen bits and pieces of the genuine culture portrayed, but rarely did we see a satisfying and informative whole picture.
Savages and Saints deals with the changing image of the American Indian in the Western film genre, contrasting the fictionalized images of native Americans portrayed in classic films against the historical reality of life on the American frontier. The book tells the stories of frontier warriors, Indian and white, revealing how their stories were often drastically altered on screen according to the times the films were made, the stars involved in the film’s production, and the social/political beliefs of the filmmakers. Studio correspondence, letters from government files, and passages from western novels adapted for the screen are used to illustrate the various points.
Instructors considering this book for use in a course may request an examination copy here.

Writer, actor and comedian Bob Herzberg is the author of scholarly books and western novels. He lives in Brooklyn, New York. 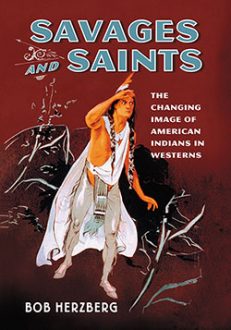