Rochelle Hudson’s career as an actress was planned from the start by her ambitious stage mother, who gave birth to her in 1916. Given rigorous dance and musical training as a child, Hudson won her first film contract at the age of fourteen. A WAMPAS Baby Star in 1931, she co-starred with actors such as W.C. Fields, Henry Fonda, Claudette Colbert, Will Rogers and Fredric March in classic films like Imitation of Life (1934) and Les Misérables (1935). But within a few years, she was stuck in B movies and frustrated. Stepping away from Hollywood, Hudson worked as a realtor and a rancher, and even did wartime espionage work for the Navy. She continued acting occasionally, in Rebel Without a Cause (1955), the TV sitcom That’s My Boy (1954-55), and the campy horror film Strait-Jacket (1964). A timeless beauty, she was married (and divorced) four times before her untimely death in 1972 at age 55.
Drawing on personal papers, interviews with family and friends and genealogical research, this first account of Rochelle Hudson’s life and work depicts a talented and outspoken woman who built a successful career on her own terms. The annotated filmography provides synopses, critical commentary and reviews for nearly 60 feature films.

David C. Tucker is the author of numerous books about classic film and television history. A retired public library administrator, he lives outside Atlanta, Georgia. 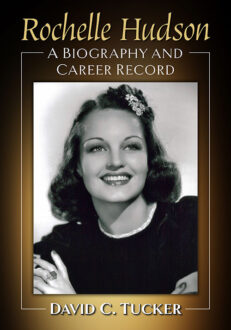