Richard III and the Princes in the Tower

The Possible Fates of Edward V and Richard of York

The fate of Richard III’s two nephews, Edward V and Richard of York, who disappeared after his coronation in 1483, has remained controversial centuries after Thomas More’s history and Shakespeare’s play laid the blame on their conniving uncle. Some later writers, unconvinced of the king’s guilt, have tried (with little success) to portray him as an innocent victim of Tudor propaganda, pointing instead to a number of unlikely culprits, including Henry Tudor and the Duke of Buckingham.
This book sifts through the available evidence about the fate of the two boys. The author examines the facts, discusses who may or may not have had information and offers a reasoned solution to the question, What really happened to the two princes?

Gerald Prenderghast is a military historian living in Kent, United Kingdom. He has published books about historic firearms, maritime history and Britain’s involvement in the wars in Vietnam.

Preface: Why Another Book About Richard’s Nephews? 1
Introduction 3
Section I: The Reign of Richard III 7
One. “Usurpation” and the Tower 8
Two. The October Rebellion 20
Three. The Road to Bosworth Field 32
Section II: Life for Edward and Richard 49
Four. Life in Fifteenth Century England 50
Five. Edward and Richard: The Princes in the Tower 60
Six. Sojourn in the Tower 74
Section III: Which Road from the Tower? What Might Have Happened to Edward and Richard? 89
Seven. The First Solution: Did They Simply Die? 91
Eight. The Second Solution: Was It Murder? 96
Nine. The Third Solution: Did They Escape? 102
Section IV: Witnesses 115
Ten. Who Might Have Known? 116
Eleven. The Family of Edward and Richard 122
Twelve. Edward’s Council and Servants 135
Thirteen. Richard’s associates. 150
Fourteen. Henry Tudor and His Early Associates 165
Fifteen. The October Rebellion 175
Sixteen. The July Rescuers 183
Seventeen. Where from Here? 196
Appendix 1: Chronology of Edward and Richard, 1470–1483 209
Appendix 2: Chronology of Richard III and the Princes 211
Appendix 3: The Titulus Regius 222
Appendix 4: Sir Thomas More’s Account of the Princes’ Deaths 226
Appendix 5: Perkin Warbeck’s Confession 229
Glossary 231
Chapter Notes 233
Bibliography 239
Index 241 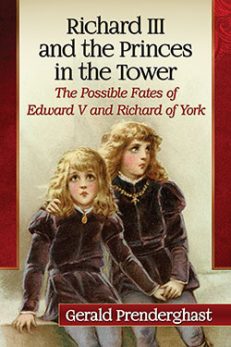 You're viewing: Richard III and the Princes in the Tower $35.00
Add to cart