The Life and Times of the Artistic Director of the Abbey Theatre, 1948–1963

Ria Mooney was the first woman to serve as the resident producer of the National Theatre of Ireland (popularly referred to as The Abbey) between 1948 and 1963. She distinguished herself as an actress and director of some of the most important playwrights and performers of her time, and received excellent reviews for her work. But after leaving the Abbey, she has, for the most part, been largely overlooked in theatrical histories.
In this work, Ria Mooney receives the notice she deserves as one of Ireland’s most significant theatrical artists of the twentieth century. Her entire theatrical career is covered and special attention is paid to her work as an actress and resident producer at the Abbey.

James P. McGlone is a professor at Seton Hall University and founder of the Celtic Theatre Company, which is in residence at the university. He lives in Boonton, New Jersey.

Part One: The Actress

“a woman worthy to be remembered…a labor of love”—The Irish Independent; “highly readable…meticulously researched…exquisitely detailed, McGlone’s work enlightens the reader with innumberable insights into the culture of the day…impressive…well-documented…a must-read for any serious student of the Irish theatre”—Irish Literary Supplement; “should be mandatory reading”—Broadside. 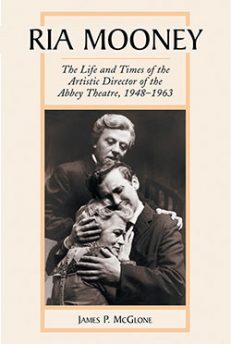