View cart “Rewriting the Victorians” has been added to your cart.

Modes of Literary Engagement with the 19th Century

The 19th century has become especially relevant for the present—as one can see from, for example, large-scale adaptations of written works, as well as the explosion of commodities and even interactive theme parks. This book is an introduction to the novelistic refashionings that have come after the Victorian age with a special focus on revisions of Charlotte Brontë’s Jane Eyre and Charles Dickens’s Great Expectations. As post–Victorian research is still in the making, the first part is devoted to clarifying terminology and interpretive contexts.
Two major frameworks for reading post–Victorian fiction are developed: the literary scene (authors, readers, critics) and the national-identity, political and social aspects. Among the works examined are Caryl Phillips’s Cambridge, Matthew Kneale’s English Passengers, Peter Carey’s Oscar and Lucinda and Jack Maggs, Lloyd Jones’s Mister Pip, Jean Rhys’s Wide Sargasso Sea, D.M. Thomas’s Charlotte, and Jasper Fforde’s The Eyre Affair.

Andrea Kirchknopf is a lecturer at Central European University in Budapest, Hungary.

First Books in Literatures in English Award—European Society for the Study of English Book
“a valuable contribution to the study of post-Victorian fiction…informative and thought-provoking…insightful and detailed close analyses of post–Victorian novels”—Hungarian Journal of English and American Studies; “a clever mix of existing and new scholarly insights into the debates over British national identity dominating this subgenre since its very inception.”—Neo-Victorian Studies. 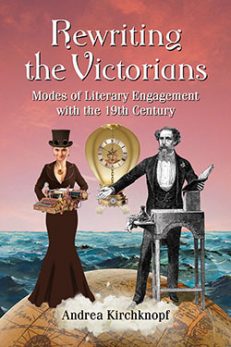 You're viewing: Rewriting the Victorians $29.95
Add to cart