The Brotherhood War and the Rise of Modern Sports Journalism

When the members of the first baseball players’ union formed their own league in open revolt against the reserve clause and other restrictive practices of the National League, baseball journalism became less of a “curiosity shop” phenomenon and moved into the mainstream. Baseball writers Henry Chadwick, T.H. Murnane, and Ella Black covered the labor struggle on the field and in the front offices—and took sides: one as a mouthpiece for the capitalist owners, one as a supporter of the cooperatively operated Players’ League, and one as a voice for female journalists. Through a close examination of their work, this book charts the rise of sports journalism in response to the famed Brotherhood War of 1890.

Scott D. Peterson is an associate professor in the Department of English at the University of Missouri-Saint Louis. The author of several articles on baseball literature and culture published in Nine, he is also the fiction editor for Aethlon, the journal of the Sport Literature Association. He lives in Saint Louis, Missouri.

Prelude: The Player, the Magnate and the Journalist in December 15

2. Early Season: Identifying the Issues and Defining the Conflict 58

3. Mid-Season: Going to Extremes and Staying the Course 92

4. Late Season: Returning to Form and Feeling the Grind 128

5. Post-Season: Reporting on the Scene and Watching from the Sidelines 162

Appendix A: Full Texts of Significant Columns from the 1890 Season 199

Appendix B: Individuals, Teams and Leagues 249

“an interesting…and even groundbreaking…book because it chronicles a previously little known and important story in baseball history…it chronicles how the story was reported in newspapers and sporting publications…more importantly, it provides us insight into the motivations of reporters…will serve as an important resource for scholars interested in further studying the contributions of journalists in embedding baseball in the American consciousness”—American Journalism; “Peterson provides insight into the emerging symbiotic relationship between baseball and the sporting press, the rise of sports hero worship, variations of promotional sportswriting…from the partisan puffery of Murnane and Chadwick to the detached, investigative reporting of Black…and the practice of sports journalism, in particular its unique mode of literary journalism and the attempts of women such as Black to gain entry.—Amber Roessner, author of Inventing Baseball Heroes: Ty Cobb, Christy Mathewson, and the Sporting Press in America 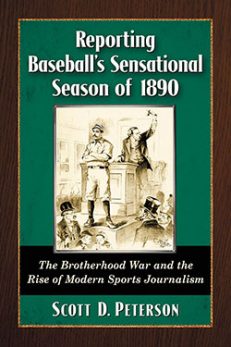 You're viewing: Reporting Baseball’s Sensational Season of 1890 $35.00
Add to cart