Memoir of a World War II Airman Shot Down Over Germany

In January 1943, not long after his nineteenth birthday, Ralph Sirianni was drafted for active duty by the U.S. Army. Ordered to the European Theatre of Operations in February 1944, Sgt. Sirianni served as the right waist gunner on a B-17. On his seventh mission over Germany, the plane—severely damaged by German fighters—crashed near Wildeshausen. With shrapnel in his legs and shoulder, Sirianni bailed out, and he spent the following 15 months in the infamous Stalag Luft I prisoner of war camp. This memoir offers harrowing stories of combat, including detailed descriptions of each of Sirianni’s combat missions; reveals the horrors of confinement and the despair of skin-of-the-teeth survival; and remembers camaraderie in the face of German abuse. Valuable for its vivid account of aerial warfare and imprisonment, this memoir is also a story of postwar reconciliation, both psychological and social. Appendices offer excerpts from Sirianni’s POW log book and pilot George McFall’s firsthand account of the ill-fated final mission.

Ralph E. Sirianni (retired) served as Director of Public Health for Winthrop, Massachusetts, and later as a member of the Massachusetts State Legislature. He is a member of Disabled American Veterans, American Ex-Prisoners of War and the 388th Bombardment Group (H) Association.
The late Patricia I. Brown was a retired lawyer and associate law librarian at Suffolk University Law Library. She is included in the National Baseball Hall of Fame. 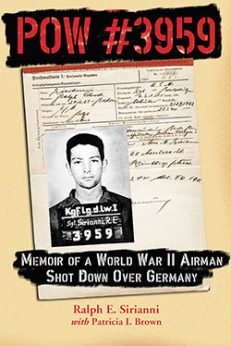