Postcolonial Theory in the Global Age

The new essays in this collection examine newer forms of colonialism operating today in an increasingly globalized world. Recognizing the complexities and culpability of postcolonial politics, the contributors fill gaps that exist at theoretical levels of postcolonial studies. By studying film, literature, history and architecture, they arrive at new ideas about immigration, gender, cultural translation, identity and the future. The collection is driven by notions of ethics, an increasingly influential force at the grassroots if not the international level, addressing capitalism and its attendant drawbacks throughout the course of the book.

Postcolonialism and Recovery: A Future Evermore About to Be (Roderick McGillis) 21

“Pity the Poor Immigrant”: Pity and the Colony (David Punter) 50

Resistance to Responsibility: Interrupting the Postcolonial

Cultural Translation in the Age of Globalization (Shaobo Xie) 87

Gender, Hybridity and the Transcultural “Man Alone” in the Short Fiction of Frank Sargeson and Doris Lessing (Joel Gwynne) 136

Postmodernist Postcolonialisms and Feminisms: A Passion

“recommended”—Choice; “This collection of essays is a thoughtful update on the place of postcolonial theory in recent times. If the counterhegemonic thrust of poco theory is still relevant today, this is true in a way that revises hypostatic terms like ‘self’ and ‘other,’ global ‘north’ and ‘south,’ ‘centres’ and ‘margins.’ The individual contributions to this volume, capped by a useful critical introduction, provoke thought towards a more disciplinarily-open and affectively-engaged theory, one that is alert to the shifting transnational flows and changing regional realities of our global era.”—Professor Robbie B. H. Goh, National University of Singapore. 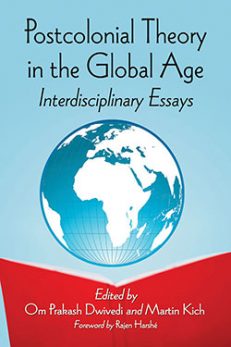 You're viewing: Postcolonial Theory in the Global Age $39.95
Add to cart